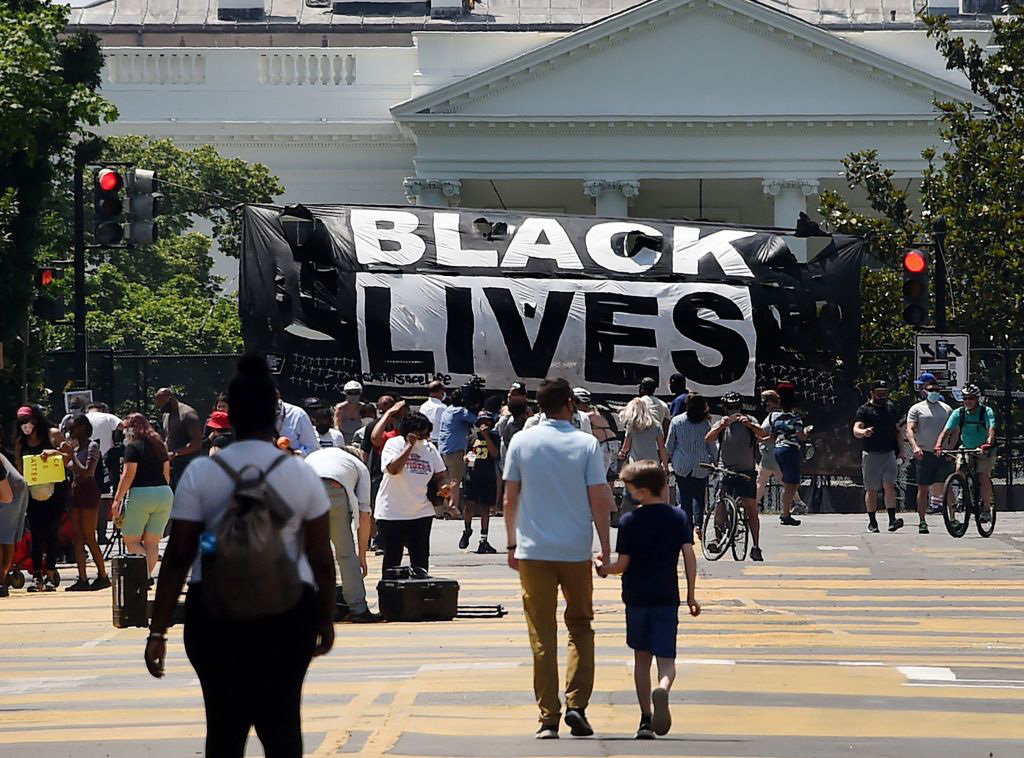 As if racial issues weren’t contentious enough, the debate surrounding Black Lives Matter (BLM) is rife with controversy. Half-truths and misinformation continue to dominate the national conversation. This confusing cacophony demonstrates the need for a clear and nuanced evaluation of some much-neglected data.

Understanding the distinctions between the entity known as Black Lives Matter, the larger movement known as Black Lives Matter, and the hashtag #BlackLivesMatter is essential to successfully navigating the tumultuous and muddy waters of this topic. Consequently, we will explore each of these three components separately, including how they differ and how they overlap.

But first, to provide the proper context, let’s examine a short timeline of BLM’s beginnings.

It all began, of course, with the hashtag. #Blacklivesmatter was coined by Alicia Garza and Patrisse Cullors in 2013 in response to the shooting death of Trayvon Martin. To quote from Beyond the Hashtags, a study by the Center For Media & Social Impact,

For more than a year, #Blacklivesmatter was only a hashtag, and not a very popular one: it was used in only 48 public tweets in June 2014 and in 398 tweets in July 2014. But by August 2014 that number had skyrocketed to 52,288, partly due to the slogan’s frequent use in the context of the Ferguson protests. (9)

Exclusive Op-eds from the

By far, the most controversial element of BLM stems from the Global Network specifically — not the larger movement.

First, Patrisse Cullors has said this about herself and her Global Network co-founders: “We are trained Marxists. We are super-versed on, sort of, ideological theories.” Marxism is, of course, a fundamentally flawed ideology that is starkly opposed to a Christian worldview.

Second, the Global Network itself takes a pro-choice position on abortion: “We deserve and thus we demand reproductive justice that gives us autonomy over our bodies and our identities…” This stance denies the worth and dignity of pre-born children, as well as their unalienable right to life.

Third, the Global Network’s About Us page lists a handful of causes they support (other than racial justice), some of which inherently contradict the teaching of orthodox Christianity and work against the human thriving and liberation they espouse.

Fourth, some within the Global Network leadership take a “more religion, not less” approach to spirituality, infusing their activism with various practices, including ceremonies in which the names of deceased ancestors are invoked, the creation of sacred sites and altars, and techniques taken from Buddhist, Native American, and mindfulness traditions. Furthermore, Patrisse Cullors promotes the freedom to “commune with the divine” as each person sees fit, since “we believe all connections to the creator are sacred and essential.”

As such, even prominent conservative Christians who are sympathetic to the BLM movement have warned others against direct involvement with the Global Network itself.

THE GLOBAL NETWORK  THE MOVEMENT

One more element further complicates this matter. The Global Network owns the domain name www.blacklivesmatter.com. When someone enters “black lives matter” into their search engine, the URL for the BLM Global Network will be one of the first results, if not the first result. So when visitors click the link, which directs them to the Global Network’s website, they might assume this website represents everyone involved in the BLM movement.

While understandable, this assumption is inaccurate. As Catholic radio host Gloria Purvis has said, the BLM movement should not be viewed through the lens of only one entity: “It’s a mistake to say that Black Lives Matter — the organization — is the head of this movement. That’s like saying that one organization is the head of the pro-life movement.”

In an interview with In These Times, Alicia Garza provides clarification on the difference between the organization known as Black Lives Matter and the larger BLM movement (emphasis added):

So there’s both an orga­ni­za­tion [the Global Network] that is being built inten­tion­al­ly — that has a set of prin­ci­ples, that has a vision, that has account­abil­i­ty to one anoth­er, and that also has guide­lines for how we want to work togeth­er. The move­ment has many ide­olo­gies and approach­es, but is uni­fied by the desire to make Black lives matter. . .

At the Black Lives Mat­ter [Global] Net­work, we aren’t con­cerned with polic­ing who is and who isn’t part of the move­ment. If some­one says they are part of the BLM move­ment, that’s true — if they’re work­ing to make sure that Black lives do mat­ter. But we don’t con­trol the movement.

The “many ideologies” in the movement include different social, political, ethnic, and religious groups (Catholics and Protestants among them). The “many…approaches” of the movement include civil disobedience (protesting, picketing, etc.), social media activism, legislative reforms — and, on the extreme end, uncivil disobedience (looting, vandalism, etc.). To date, some leaders within the Global Network have denounced the use of violence and vandalism, but not to the degree one would rightly hope or expect.

Taken on the whole, Black Lives Matter is “a loose confederation of groups advocating for racial justice. As a movement, Black Lives Matter is grassroots, decentralized, and leaders have emphasized the importance of local organizing over national leadership.” In the words of BLM activist DeRay McKesson, “the movement is much bigger than any one organization.”

The decentralized nature of this movement needs to be emphasized. Many imagine BLM as having a clear hierarchical structure with national coordination and organization, with the Global Network at the head of everything. As we have seen, that is not the case.

In certain respects, the pro-life movement, which is also highly decentralized, has more organization than the BLM movement. Colin J. Mason, a credentialed photojournalist who has covered BLM protests, explains it this way:

I think white conservatives, particularly Catholics, are in a situation where their main (sometimes only) large-scale protest experience is with events like The March for Life, and that’s where they draw their conclusions from. The March for Life, while technically a protest, is run administratively by a structured non-profit which treats it as an event. As a result, it’s much more like a large-scale concert or a political rally than a grassroots protest. There are, of course, grassroots elements there, but they are subsumed into the larger, more organized conservative whole.

I CANNOT EMPHASIZE ENOUGH how this is not the case with BLM. BLM protests are messy, shaggy, almost completely organic, and fairly diverse in their representation of political viewpoints and end goals. When I was in downtown DC (on June 6th [2020], especially, since it was a Saturday night) it was very obvious that the gathering was not organized by any governing body. There were strident protesters, agitators with megaphones arguing for questionable tactics, counter-agitators urging against violence, drum circles, dancing, singing, pop-up food stands and restaurants, and more. It was about as organic and decentralized as it’s possible for an event to be. It wasn’t a political rally. It wasn’t even a march. It was just…a lot of people, most of whom clearly lived nearby, protesting and gathering.

As Alicia Garza stated earlier, to be a part of the national BLM movement, one need simply say he or she is. As such, the movement is decidedly heterogeneous, not homogeneous; it comprises “the sum of all organizations, individuals, protests, and digital spaces dedicated to raising awareness about and ultimately ending police brutality against Black people” (Beyond the Hashtags, 9).

With a grassroots movement as diverse as Black Lives Matter, people can use the hashtag itself in different ways — some helpful and some harmful. But what can we learn from research about the hashtag’s predominant usage? Is there a discernable thread or central tenet that can be traced?

In 2016, the Pew Research Center reviewed 13.3 million tweets mentioning race in general (including uses of #BlackLivesMatter in particular), analyzing them with an algorithm to determine their subject matter and tone. Here are some of its findings:

Another study we’ve already cited, Beyond the Hashtags, deserves further inspection. Published in early 2016, this study analyzed an even larger data set: “40.8 million tweets, over 100,000 web links, and 40 interviews of BLM activists and allies” (5). This study’s findings include the following:

Based on the above research, the hashtag appears to be used primarily in at least one of two ways:

Interestingly enough, this two-fold message closely aligns with what the Global Network itself says on its website: the hashtag was created with a mission to “eradicate white supremacy and build local power to intervene in violence inflicted on Black communities by the state and vigilantes.” In other words, the #BlackLivesMatter hashtag was designed to fight against racial inequality in general, and brutality (including by police) toward black people in particular.

Nevertheless, some continue to express skepticism regarding the clarity of the hashtag’s core message. One potential factor of this perceived ambiguity, as gleaned by Beyond the Hashtags, is this: “while other movements advocate on behalf of more broadly-defined social groups,” Black Lives Matter “aims mainly to improve the everyday lives of…[a] racial minority — Black people in general and Black youth in particular” (7).

In other words, BLM activists (who are focused on a narrow slice of societal injustice) can often be viewed with suspicion by outsiders, as if these activists are cherry-picking only those atrocities that fit their political agenda. (Pro-life activists are routinely victims of such suspicion.) This confusion about the hashtag’s meaning is prevalent enough to be noted by the website Dictionary.com: the visibility of the hashtag “has caused some to misinterpret the movement’s mission as valuing Black lives above other lives.”

Since this misunderstanding persists, it would be helpful to hear how proponents of the larger movement have responded to the confusion:

We can thus conclude that anyone who does use #BlackLivesMatter to communicate a disparaging or hateful attitude toward other ethnicities is not communicating in accordance with the intended message of the hashtag.

A CALL FOR NUANCED EVALUATION

In light of the above observations, what is the proper Christian response to Black Lives Matter? Based on the complexities related to the hashtag, the nationwide movement, and the BLM Global Network, the answer to such a question is also complex. In short, there is no one-size-fits-all approach. It all depends on the context of each discussion.

The observations in this article are not designed to condone blanket praise or blanket condemnation. In fact, neither of those options is legitimate for Christians evaluating a movement as intricate as Black Lives Matter. When we paint with such broad brush strokes, we simplify and distort reality—in violation of our call to avoid lying lips and false testimony (see Exod. 20:16; Pr. 12:22). We must reject both naiveté and uncharitable judgments.

Regardless of our conclusions when evaluating Black Lives Matter, let us make sure we acknowledge the truth, the whole truth, and nothing but the truth.

Cap Stewart is the author of the curriculum Personal Purity Isn’t Enough: The Long-Forgotten Secret to Making Scriptural Entertainment Choices. As a cultural commentator, he has contributed to Cultural Engagement: A Crash Course in Contemporary Issues (Zondervan Academic, 2019), among other print and online publications. He has been blogging at capstewart.com since 2006.